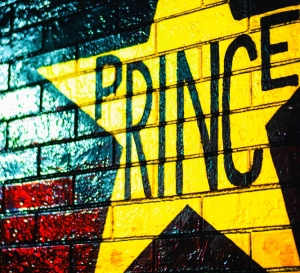 1. As with many of our trips, this vacation was inspired by a resident’s personal bucket list.  An offhand comment from a QIDP about wanting to go to Minneapolis became a four day/three night jaunt to Prince’s hometown and a tour of Paisley Park!
2. That trip was one heckuva double date. Most couples enjoy traveling together. Adventures are more fun when shared with a significant other, and for this trip we had not one but TWO couples on the trip. (Last I heard, both couples are still together…)

Photo Caption: Diane and James By The Tree
3. Shame on you, Minneapolis: not one of the shuttles from the airport to our hotel were wheelchair accessible, so if you were a person who relied on a wheelchair for mobility, it was up to you to secure your own transportation! Travel is hard enough for folks with physical impairments…but to have to hail a cab at 9:30 PM after a long day of travel? (And we had to take a regular cab with the added burden of transfers and folding and lifting that heavy chair…)

Photo caption: Merry-Go-Round
Looks like an opportunity for growth for that hotel chain! (You can bet we will be speaking out about that one via our top-notch vehicle for advocacy around issues of disability - JJ’s List.)
4. By the time we arrived in Minneapolis, every single car/SUV/van in town had been rented! (St. Paul: also out of cars.) What an unprecedented moment in SFA history - when our accessibility needs changed, we faced the very real possibility that we might be without transportation! Thankfully our faithful rec gods were on duty, and a brand new rental agency happened to have a few 12 passenger vans in their fleet - the only vehicles left in the Twin Cities area!

Photo Caption: Ferris Wheel
5. Prince’s house isn’t purple… except for a couple of small purple triangle tiles along the building. We were all a little surprised at how “un-fancy” Paisley Park looked from the outside. At first glance one might think the building was simply a warehouse but NOPE. Inside was an atrium (get this: Prince’s ashes are stored in that atrium in a miniature version of that atrium #meta), a gigantic sound stage where the film Graffiti Bridge was filmed in its entirety, a trippy party room where they say he would often project “Finding Nemo” onto the wall, a dance studio, a state of the art recording studio, and lots of pictures of his eyes painted on the walls.

Photo caption: Glass Ceiling
6. I can’t show you any pictures of Prince’s house because they locked your phones/cameras up before the tour, but I can show you this bench at Prince’s favorite Walgreens that he probably sat in at some point.

Photo Caption: Bench outside Walgreens
7. We spent a whole day in the Mall of America and the rumor is true: there is a whole amusement park in the middle of the mall, complete with a midway, a roller coaster, and a ferris wheel - just to name a few of the attractions.

Photo Caption: Midway
8. The hostesses at the Hard Rock Cafe told our group that we were their favorite group ever. And I believed them.

Photo caption: "Live Your Life" Sign
9. We went to a comedy club in the Mall of America, and there may and may not have been a few blue jokes told that night.

Photo Caption: Comedy Club
10. In hindsight, it seemed the real reason we went to Minneapolis was so that Jeannie could free this red handbag from the shelves of a shoe store on the first floor of the Mall of America. Once this clutch was in her (rightful) hands, it never left them. In the restaurant for dinner that night? Check. On the couch in pajamas? Check. On the airplane home? Check.

Photo Caption: Red Hat & Purse
For the really lucky ones, a Search for Adventure ends with unexpected treasure.