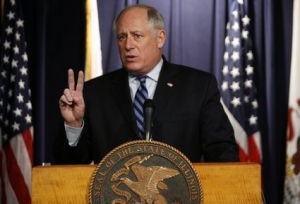 On March 26, Governor Quinn delivered his 2015 budget address before the Illinois General Assembly. Framed against the backdrop of an estimated $3 billion state budget deficit, an expiring income tax increase and a competitive gubernatorial election in November, the FY15 budget proposal was particularly fraught for the governor.

In a speech that focused on education and property tax relief, as well as commitment to human services, Governor Quinn called for extending the 2011 income tax increase to prevent "extreme and "radical" budget cuts.

In July 2010, Governor Quinn signed into law the Budgeting for Results Act, which ties the allocation of funds to specific performance measures and revenue projections. Simply put, the law obligates the State to live within its means by requiring that spending not exceed revenue. Spending on programs is prioritized and priced, with some falling above or below a line which determines what will be funded, depending on how much revenue is available.

This year the Governor has provided two budget requests for FY15 – one that maintains existing income tax levels and one that does not. The two budgets provide Illinois with a stark choice going forward. On January 1, 2015 the state income tax will phase down, reducing state revenues by an estimated $1.6 billion in FY15. A loss in revenue of $1.6 billion would seriously threaten the progress Illinois has made toward expanding access to programs in the community for people with intellectual and developmental disabilities. If we do nothing, these critical programs could face a massive 24.5% across the board cut.

Maintaining current income tax levels would guarantee that Illinois is able to meet its obligations under court-ordered consent decrees requiring services for people with intellectual and developmental disabilities. It would also ensure that Illinois continues to make the investments that are necessary to meet increased demand for person centered, highly flexible, community-focused services and supports.

Smaller living arrangements, opportunities for employment and full integration into the community are desires shared by all people with intellectual and developmental disabilities, as well as their families. A FY15 budget that does not maintain existing income tax rates, cuts funding and steps back from consent decree requirements does a tremendous disservice to the desires of thousands of people and families in Illinois.

Contact your State legislator today and urge them to support maintaining current income tax levels in FY15 budget. Let them know what’s at stake if they allow existing income tax levels to phase down. Click here to find contact information for your State Senator and Representative.