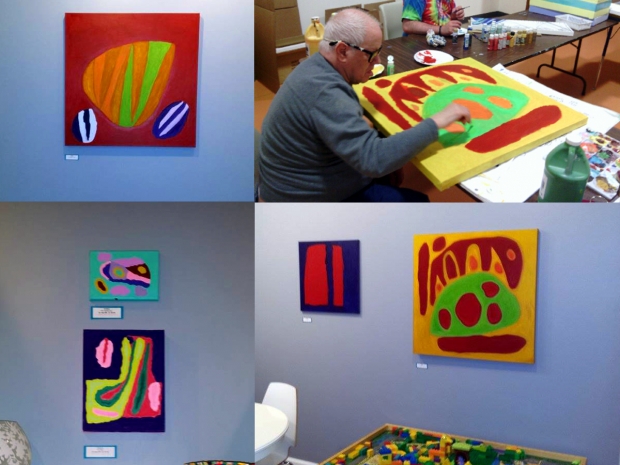 Today we are shining a light on Ed, a longtime visibility artist who has his first solo exhibit coming up on Friday, October 23, at Gather in Evanston. Ed's story shows us the incredible creativity and talent people with disabilities contribute to their local communities across the globe.

Ed's creative journey began almost 15 years ago, at Search's adult learning site in Lincoln Square. That's where he met a young studio artist named Tina Zemen. Tina approached Ed about participating in a small group that was meeting twice a week to explore their creative interests and abilities. Ed decided to join the fledgling group and it wasn't long before he discovered his gift for creating weaves out of seed beads and jewelry making.

By 2008, what started as a small group of arts enthusiasts had grown to become the comprehensive visual arts program we now call Visibility Arts, led by manager Tina Zemen. Being a visibility artist and making art had become Ed's primary focus in life. He dedicated himself to learn all he could and develop his artistic skills. Some of his favorite classes through the Visibility Arts program have been art history, color theory and painting.

Over the last few years, Ed's interest in painting has really taken root and he's begun to develop his own unique style. Once a blank canvas is in front of him, Ed draws some shapes and begins to paint. His organic shapes and playful color relationships have a poetic, emotional impact on the viewer. Ed really enjoys seeing people's reactions to his work. Perhaps it is the joy and pride he feels in sharing his art that Ed has recently been working on larger paintings. Working on a larger scale has been challenging for Ed, but with each brush stroke his style becomes more recognizable and strong, taking his work to the next level.

Ed will be having a solo show on Friday, October 23 from 6:30 - 9pm at Gather in Evanston, in their back room space, The Nest. Ed's show is part of a celebratory reception for the School of the Art Institute of Chicago Art Therapy Faculty Exhibit which is on display at Gather thru November 1st. RSVP here.