Books & Plays Club Returns with Fiddler on the Roof 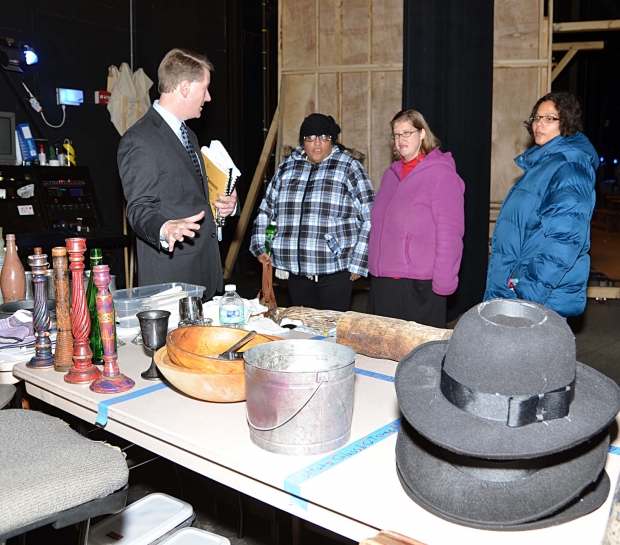 Every Thursday evening in October through the first week of December, 11 individuals participated in Search's Book and Plays Club. Many of the same individuals who read Romeo and Juliet in the first session of the Club decided to participate again, and there were some new faces, as well. In this semester the Book and Plays Club read Fiddler on the Roof and the short stories upon which that play is based.

In addition to the readings and acting-out the scenes, the class incorporated the classic film version of Fiddler on the Roof and culminated in a one-of-a-kind experience at Harper College. There, the students were given an exclusive behind the scenes tour of the theater, the dressing rooms, the make-up room, backstage and even got to go on stage on the set of Harper's production of Fiddler on the Roof. All of this came before the wonderful performance of the play that was thoroughly enjoyed by a full crowd in the sold out theater.

Allison P. raved, "I liked the entire play – the acting, the singing, the dancing."

Kristina A. agreed, saying "I really enjoyed the dancing, especially during the wedding scene."

Stephanie K. thought that it was very kind of the director to take the students on a tour of the theater before the show and answer the questions that they had about the performance. She found the content of the play interesting and was impressed by the lead actor who portrayed Tevye.

Everyone in the class would like to thank Harper College, especially director Kevin Long. They would also like to thank their teacher, Ms. Teri, who for a second time as the instructor of the Book and Plays Club has offered a meaningful social opportunity for the consumers to push themselves in a stimulating, educational experience.