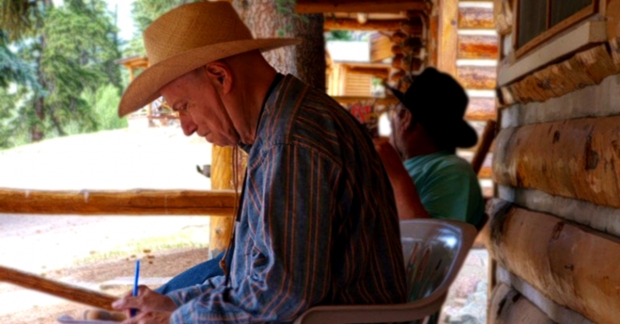 In honor of #GivingTuesday, coming up on November 29, 2016, we are sharing a story about the impact of your gift to Search.

Each year Search offers our participants opportunities to see the world through our vacation program, Search for Adventure.  Created and supported through a unique partnership with Toad&Co., as well as contributions like yours, Search for Adventure offers adventures of a lifetime to people with disabilities, regardless of their ability to pay.

This is a story about Ed’s adventure.

Ed was 70 years old when he finally got the opportunity to live in the community.  Ed had been living in a nursing home in Chicago’s Uptown community for two decades, and before that in a state institution.

During his first few years in the community, Ed was quite active and explored a number of hobbies and interests.  Eventually, he found horseback riding and became an enthusiast.  He rode weekly at a therapeutic riding program in DuPage County.

With Search for Adventure, each participant gets a say in trip planning. When it came time for Ed to plan his own trip he said that he wanted to ride horses on his vacation.  When his support staff began to suggest out of state therapeutic riding programs, Ed let it be known he wanted to ride horses out West with the cowboys.  A couple of months later, at 79 and  a half years young, Ed and three of his riding buddies set out for the Powderhorn Dude ranch in the foothills of the Rockies in Colorado.

For four days, Ed and his buddies rode horses with cowboys, ate out of the chuckwagon, sat by the campfire on starry nights and slept in the bunkhouse.  When their last night on the ranch came, Ed refused to go to bed.  He said he wanted to stay by the campfire, keep his ten gallon cowboy hat on and watch the stars. .

Ed’s support staff, Jennifer, stayed up with him and they talked for a long time.  About an hour later, it was clear that Ed was winding down and, after staring at that massive starlit sky in silence for a long time he turned to Jennifer and said, “Is this heaven?”

At nearly 80 years old, the stars aligned, the world stopped to listen and Cowboy Ed had his very own magic moment.

It’s those moments that each and every one of us lives for.

If you would like to be involved in creating magic moments like Ed’s, please join Search for our 2017 #Giving Tuesday campaign.

There are so many ways to be involved! Please click here for more information.

Note: This story was originally published in 2016.