Letter from the CEO - FY 2016 Budget Update: A Lot Has Happened But Nothing Has Changed 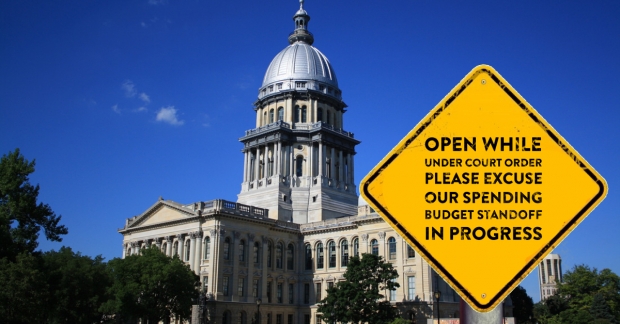 Back in May, I voiced my strong belief that negotiations between Governor Rauner and legislative leaders on the FY2016 budget would drag on well into the new fiscal year.

Throughout the spring session, the Governor had telegraphed his willingness to compromise on raising new revenue if Democrats would accept his pro-business reforms to workers compensation and unemployment insurance as part of a comprehensive budget deal. But, lawmakers didn't bite and went on to pass a budget by their May 31st adjournment date without taking up a single provision of the Governor's "turnaround agenda".

Common political wisdom held that, in a protracted stalemate with House and Senate Democrats, Governor Rauner had all the leverage. With his veto power, the Governor could block spending indefinitely and blame democrats for the impasse. As people began to feel the pain of a full-on government shutdown, pressure would mount on Democrats to come to the table and cut a deal.

The common political wisdom was wrong.

The Shutdown That Wasn't

A lot has happened since June, when the Governor vetoed 19 of the 20 spending bills comprising the FY 16 Budget passed by House and Senate Democrats. But, nothing has changed. Sixty-four days on, Illinois is still without a budget and the impasse between the Governor and General Assembly remains mired in acrimony with no end in sight.

Throughout July, we watched events in Springfield closely and prepare for the worst – a government shutdown.

Then in early August something big happened. The Illinois Department of Human Services announced that it would resume processing payments to Medicaid providers as if a budget had been enacted this fiscal year. We were informed that payments for the Medicaid-matched services we provide would be going out to Search and community agencies across Illinois by the end of August. The standoff did not result in a government shutdown as we feared.

Due in large measure to decisions handed down by federal and state courts; and despite there being no budget, State workers are getting paychecks, spending on court mandated services has resumed, Medicaid Waiver funding is coming back on line, payments are being made to pension funds, debt service and tax refunds. The list goes on. According to the State Journal Register, Democrats in the Senate are saying that '90% of what the state usually spends has been authorized' even with no approved budget.

From Search's perspective, with monthly payroll and operating expenses approaching $2 million, getting paid is better that not getting paid. However, there is a big downside to running the state without a budget.

Illinois doesn't know at what rate its spending money. No, really. According to the State Journal Register, lawmakers think the state 'is on track to spend about $38 billion this year'. That's what we spent in FY 15. Though we have no real way of knowing, if that assumption bears out, we could be looking at a deficit of roughly $5 billion in FY 16.

Even if the budget stalemate ended today, that would leave the state just 10 months to bring a full year's worth of spending into balance with projected revenue. And of course, the stalemate isn't ending, not today, and almost certainly not anytime soon.

Without the threat of a full-scale government shutdown, neither side in the standoff has much incentive to make the concessions that would be needed to strike a final deal. The situation grows more ominous for Search as each month passes.

Adding to the gloomy outlook, there appears to be mounting confusion over at the Comptroller's Office and the Department of Human Services as to whether or not the State is complying with two recent court orders to meet its obligations under Ligas and other federally mandated Consent Decrees. The court has compelled the state to make payments according to a specific timeline and at funding levels of no less than in fiscal year 2015.

At question is over $70 million in billing approved for community agencies that the Division of Developmental Disabilities turned over to the Comptroller and whether the State can make the payments. The Comptroller's office has since confirmed that the state did make $71 million of "applicable emergency payments". What exactly is meant by "applicable payments" is anybody's guess. Nevertheless, the State has until September 18th to come into full compliance with the courts orders.

Given that money continues to flow out of State coffers at an undetermined rate despite the absence of a budget; and given that the state is likely spending at a pace that will exceed the current budget year's estimated income by $5 billion, it is conceivable that our funding, once a budget is enacted, will be reduced from FY 15 levels. The magnitude of any eventual reductions will grow exponentially the longer we go into the current fiscal year without a resolution. Given the uncertainty, Search is prepared to react in a responsible way once an FY 2016 Illinois State budget is eventually approved.

Irregardless, Search will need to find a way to continue to meet the challenge of providing quality services and moving the progress "needle" in a positive and hopeful direction.

Our greatest challenge and highest priority must be to find a way to raise base salary levels of our Direct Service Professionals so that we can stem the tide of staff vacancies and stabilize our program services workforce. We must also continue our considerable progress focused on expanding our employment programs, enhancing our day service sites and programs and continuing to build new program alternatives that align with the demands and desires of the people and families we serve.

Accomplishing all of this without new financial resources surely defines perhaps the greatest challenge in the history of the organization.

The best possible resolution to this immediate crisis remains an FY 16 budget compromise that balances a mix of spending reductions with savings from reforms and new revenue. But, one thing is certain; under the current plan it's not going to do much to improve the lives of our citizens with intellectual and developmental disabilities.

The fact remains that the community system of care in Illinois is at the precipice of collapse, and has been teetering there for years. The state has so undermined human service organizations over the past 10 years that the community system has splintered at its core. At this point the system of community care requires a substantial investment in the form of base rate increases to rebuild infrastructure and create the capacity needed to meet the burgeoning demand for flexible, person centered services.

Now is the time for Governor Rauner's administration and the leadership of his Department of Human Services to step forward with a "turnaround agenda" for community services.