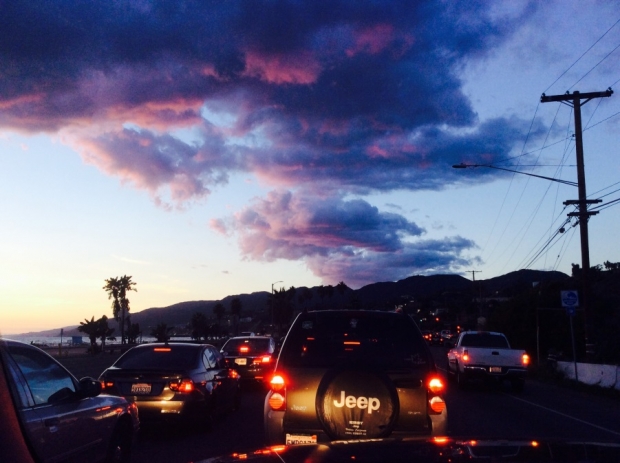 Search for Adventure once again headed out west for an art show at the Toad&Co headquarters located in the beautiful Santa Barbara, CA.

The festivities were kicked off with a yummy brunch at Breakwater Café, just yards away from hundreds of swaying sailboat masts docked in the harbor. The proverbial ice was broken with a roundtable discussion between the Adventurers and the Toads about a most pressing issue: “Which celebrity would you invite to breakfast, today?”

Jennifer: Alanis WHO? You are dead to me, Tina.

Daisy (Toad content manager/copywriter): I think it would be great if Steve Carrell came and just made us laugh.

Daisy: Oh, good one! Can I change my mind?

Jennifer: You mean the guy who played Peter Brady?

Val: Steve you’re the only guy at a table of all girls!

Steve: I noticed that.

Then Jennifer promised to give anyone $5 if they spotted a celebrity during the trip.

Jennifer: I promised $10 if anyone spotted Jennifer Aniston.

Tina: You didn’t even ask me about my celebrity. It would be Ellen DeGeneres.

But before anyone could scan the area for famous people, two surreys packed with pedaling Toads pulled up to escort the Search crew to the pier for a tour of the Santa Barbara Sea Center.

Daisy: This was most memorable experience of the trip for me. Everyone’s personalities were magnified when it came to touching the sharks in the touch tank.

Abby: They were acting like dogs! They came up to the side like they wanted us to pet them!

Danielle: I was scared.

Daisy: But you ended up touching them. You did it!

Danielle: Yes, I did. (laughs)

Val: They freaked me out.

Marcia: I didn’t touch them, and I’m fine with that.

Jennifer: I liked it when Carlynn and I went into the cave-y tunnel thing and saw all the lobsters in the wave pool.

Jennifer: You are kind of a kid.

Later that night, the ladies got all gussied up and attended our first annual “Friendsgiving” dinner at Toad&Co headquarters. It was part art show, part mixer, part feast!

Tina: It was the most amazing potluck I’ve ever been to.

Jennifer: It never ceases to amaze me what the Toads are able to do. It’s not enough that they dress so well, work for such an amazing company, and live in one of the most beautiful parts of the country, but they can also deep fry turkeys and make killer apple pies. It almost isn’t fair.

Danielle: I got to tell people about touching the sharks.

Val: There were dogs at the potluck, too!

Abby: Steve got up and gave us a toast!

Marcia: It was fun but I still wish I had sold my painting. Oh well. They can still buy one of Search’s holiday cards I designed this year.

The next morning, after a self-guided sightseeing tour in an SUV fit for the presidential motorcade…

…both crews met up at the Farmer Boy diner to carb-load for the next leg of their trip.

When asked what their favorite part of the trip was so far, each Adventurer had a different response:

Marcia: Having my dream come true. I’ve always wanted to go to California and now I have.

And with that, Search, Inc. and Toad&Co. said their good-byes, and the Search crew headed off to LA for one more unforgettable experience. Our timing was its own kind of Hollywood tragedy, as we just missed seeing Brad and Angelina by a measly 24 hours. The premiere of their movie “By the Sea” had taken place just one night earlier.

Jennifer: I would have probably given them the $10 prize for spotting Brad and Angelina. I mean, that would be kind of like spotting Jennifer Aniston, right? No?

As is always the case when the two superpowers meet, every Toad and every SFA Adventurer is forever changed by their time together.

Daisy, who hadn’t spent much time interacting with people with disabilities before this SFA trip, was most struck by how such universal human qualities were able to shine right through the “disability” - not the least of which was the ladies’ sense of humor, and especially their ability to poke some light fun at themselves. Daisy says, “Humor is such a human quality, regardless of disability. You’re not fragile. You’re mentally strong in many ways and very relatable and normal.”

In a “totally selfish” way, Daisy thinks she got more out of the day than the Search group did. She was reminded how nice it is to spend time with people who think a little a differently. She says, “Sometimes we forget to be nice and respect everybody, to slow down and not be in a hurry to do everything. Whether it’s interacting with a checkout cashier or a friend with a disability, it always helps to be patient when you’re communicating with someone else because you never know their story.”

Jennifer: Well said, Daisy. All except for that part about getting more out of the day than my crew did. I’d have to say that was a draw.

This holiday season, you can make experiences like this Santa Barbara vacation possible. Your year-end contribution to Search will empower the people we serve to live, learn, work, and play as equals in their communities.
Thank you for your support!