SFA Mingles with the Stars in Hollywood 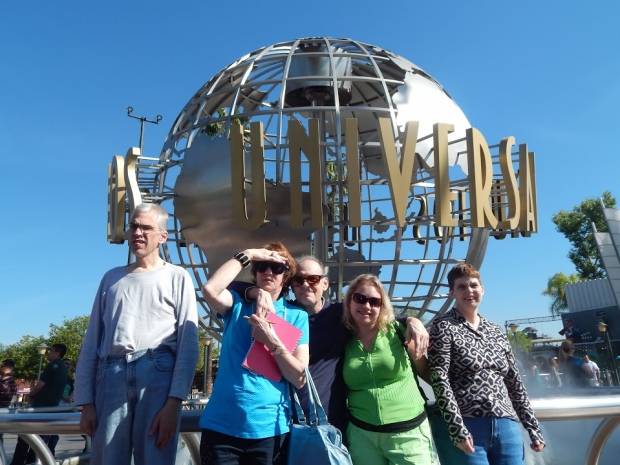 The real Mario Lopez, a fake Conan O'Brien, a TV studio, Batmobiles, talking Harry Potter hats, and a creepy Spiderman – all in four days? Sounds like LA! The second annual "Lights, Camera, Action" trip had all of the "spectacular" from last year, plus additional surprises never before seen on SFA's Hollywood Holiday.

For starters, Krysta and Angela from Lizard Lounge in Portland, OR joined our rowdy bunch of two staff and five clients. They were with us as we watched Mario Lopez tape the show "Extra" outside of the front gates of Universal Studios. They were on swoon patrol when he strolled over and gave us an autograph. They "LOL'd" right along with us during the unbelievably exciting Waterworld stunt show ("You guys, that plane had no safety wires!!") They boogied along to a Blues Brothers revival show, and mutually bemoaned the staggering amount of 24/7 traffic on the LA highways as we drove back to the koi ponds and made-to-order breakfast at our home away from home: Embassy Suites.

Day 2 brought another new friend: River Jordan (www.riverjordanphoto.com), LA photographer and super nice guy. He held the lens up to our extreme silliness as we romped and posed with waxy celebrities in Madame Tussauds. Our crew of ten craned necks to see the sets from "Pretty Little Liars," making mental connections between the show and scenes shot on the back lot at Warner Brothers. We walked through a pretend house, imagining David Schwimmer as "Ross," sitting on the stairs playing a Casio keyboard on his lap while waiting for Rachel to come over on the prom night flashback episode of "Friends."

And come on: what trip to LA would be complete without a quick trip to In-N-Out? We would not be missing the legendary burgers. Not on my watch. (If truth be told - the French fries? A little potato-y...)

The Lights, Camera, Action trip is quickly becoming a favorite in the SFA roster. Who doesn't love the movies? But even more significant than the clipped sightings of the famous Hollywood sign was the experience had by our travelers. Horny Toad's SFA volunteer program creates so much more than a gift of time. The real gift is the relationships created during the four-day adventure. Volunteer Angela summed it up best in her own words: "As a Toad of 7 years, it was eye opening so see a small portion of what Search does first hand. I had a blast with all of the clients and am walking away with some meaningful experiences I won't soon forget."

And neither will any of us on "Team Awesome."