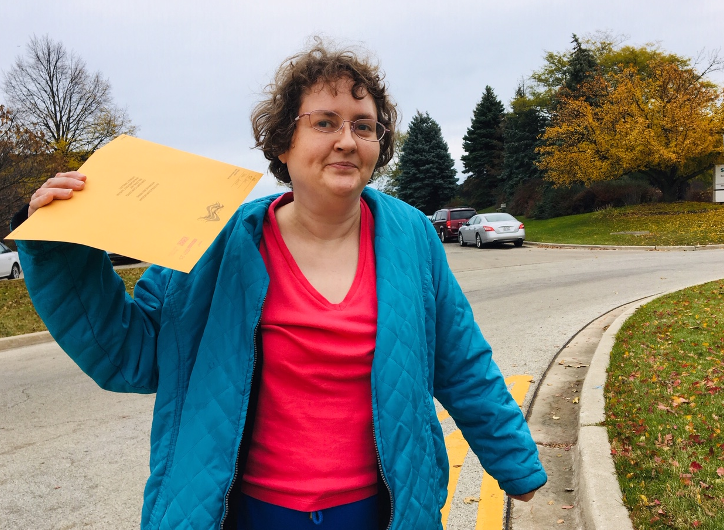 Of the approximately 4.4 million votes cast in Illinois’ 2018 general election, 30 were cast by residents of Search, Inc.’s group homes. But the journey of those 30 ballots began long before the polls opened on the morning of November 6, 2018.

Back in October, we asked a simple question of every resident of Search Inc: “Do you wish to vote?”

Each individual was given the dignity to either respond or remain silent. What mattered was that this precious right be acknowledged for each person in our care. It was not for us to “choose” which Americans should be asked. It’s best not to presume we fully know the inner life of anyone in our care.

As would be expected, many individuals offered no response. But many did, and together we moved into the next phase of the journey: education and empowerment.

Voter registration is free speech. It says, “I’m here. I’m an American. I matter.” Our self-advocates’ registrations were checked and updated.

Democracy is a responsibility. A vote should not be taken lightly. Our workshops went beyond the shiny-gross attack ads on TV. We studied the big picture and worked our way down to the offices being filled; balance of power; the three branches of government; the differences between Democrats and Republicans; and the US Senate versus the Illinois state senate.

What the heck is a comptroller, anyway? (Turns out it’s kind of a fancy-pants word for a state accountant).

At every stage we checked in on comprehension and clarity our folks had around concepts and issues. In the end, several individuals weren’t quite ready to make an informed, conscientious choice, but we still had fun learning about political stuff together.

Some, however, had quite strong feelings about a few people and the headlines they inspire.

Both the left and the right were represented in our classrooms. Some were party-line voters. Others were more interested in hearing what the candidates had to say about issues that were important to them. (Fun fact: The two hot button issues in our little community are health insurance and gun violence.)

We listened to the candidates speak for themselves. We watched informational videos on YouTube that broke down ideologies presented in the least partisan voices we could find. We googled candidates’ names and let the web gods reveal candidates’ policies and any dirty little secrets they had in their closet.

Then we got down to business and put black ink to red circles through mail ballots and in voting booths, with cheat sheets in hand to remind individuals of the names that had impressed them. Some voted just for governor – what they knew the best – while others hand-picked the offices that they cared about. One person even took on the judges section.

And for all who voted, it was a big dang deal. At its core, advocacy for people with disabilities is the fight for equality. As a society that not so long ago hid its disabled population behind institutional walls, we still have a long way to go. Funding for social service agencies is still treated as a bargaining chip instead of the moral priority it should be with every new state budget.

At the polls, however, the vote of a person with a disability counts just as much as the vote of the Regular Joe in the booth next to him or her, regardless of education, tax bracket, or zip code. A vote in an election is equality in its purest form.